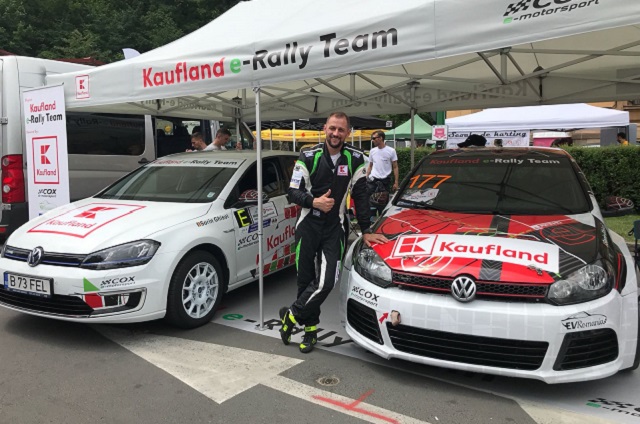 „It’s a unique feeling, it’s the future!” – was the conclusion of the four professional drivers invited to drive the first electric car that participates in a hill climbing competition in Romania.

On 9th and 10th of June, 2018, the third stage of the Dunlop 2018 Hill Climbing National Championship took place in Brasov. Among the stars was a Volkswagen Golf GTI, completely transformed into an electric racing car.

Invited by Sorin Ghisoi, multiple national champion, four experienced professional drivers tried for the first time the electric car, in rainy conditions with low visibility and adherence, on a 5 km route and an elevation difference of 235 m.

Dan Gartofan was the first to move Sorin Ghisoi to the right, to drive the electric car. In the end, Giri said: „It’s a car for good people who can no longer stand the noise. Haha, it’s clear I’m kidding, right? I want to congratulate Sorin Ghisoi for the initiative to think of such an eco project, it is clear that this is the future,  even if I for one, for the time being, still like the noise. I will leave it to Sorin to be the first one.”

Lucian Radut, who won this third round of the National hill climbing Championship, with a 2’40″597 on a 5 km track, was the second professional pilot to try the electric car this weekend. „It was a unique experience, especially since we never drove an electric car. We all tried electric scooters, bicycles, anything else electric, but not a car. I thank Sorin for making this proposal and I trust that he will accomplish this project that changes the world. We’ve known each other for 20 years and I have full confidence in him, „said Lucian Radut.

Ovidiu Zaberca has also tried the electric car. Ovidiu confesses: „I was surprised by the silence, it’s very new, I only heard the tires. I thought I was watching Formula One on TV, not that I was on the road! I congratulate Sorin for having this idea and who knows, maybe we’ll all go racing electric cars, same as street cars, that’s what I think will definitely happen in the future. ”

The three drivers who responded to Sorin Ghisoi’s challenge to make an electric car test joined Mihai Beldie, who, besides a racing pilot and accredited instructor, is also the founder of a car vlog. „I love it a lot, it’s a super wow sensation, it’s a great project, I’ll come back to drive this silent car if you allow me,” said the enthusiastic pilot-vlogger.

In the previous stages, the silent car has conquered the hearts of other brave people who experienced the excitment, among them being the cop Marian Godina, who changed the Romanians’ perception about the Police, Bianca Constantin, Miss Universe 2009, Corina Nivnea , Miss Global Beauty Queen 2015, journalist Marius Saizu, ex-pilot, TV host Teodora Antonescu, bloggers, vloggers, etc.