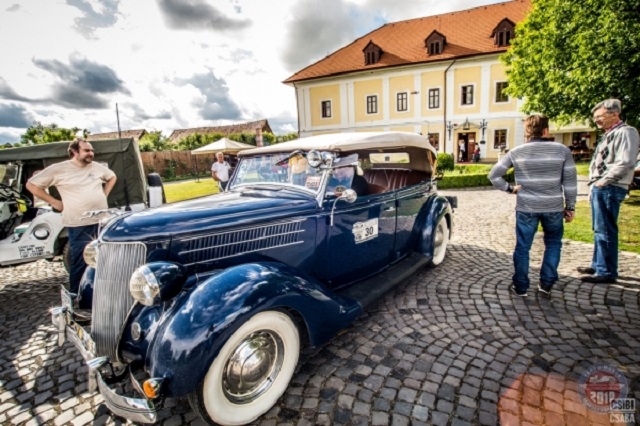 It is a great pleasure to mark today the debut at 24auto.ro of our friend Ovidiu Serban. A fine connoisseur of motor sports, especially rallies, his articles will be focused on the Romanian championship of historical vehicles. We are honored to host his signature and expect a fruitful collaboration!

The passion for vintage cars, historical, retro-cars or old-timers and the desire to race are united in this new discipline called regularity rallies, which we love more and more lately.

When we say „rally”, we think of the fight with seconds, hot tires, cracked brake discs and broken shock absorbers, difficult roads through forests, deserts, snow and ice, muddy windshields. Not in this case!

Cars older than 30 years are the stars, and their driver-owners, caring for them into a second youth, are helped, coordinated and supervised, especially speed (!), mostly by their wives.

All cars must be certified as historical models, have to pass a technical check and be insured, and all participants have to be members of RCR (Retromobil Club Romania) https://retromobil.ro/ or an affiliate club.

Before the start, crews receive from the organizers a road book. Its purpose is to help teams discover the route, the length of the stage, the ideal time, as well as the control card or the road map indicating the place for start and finish of special stages, and the average speed to be achieved.

Like the speed rallies, the ones we are talking about here have several stages of different length and the average speed cannot be more than 50 km/h, following of course all traffic rules on public roads.

Each stage contains several special stages to be performed in open traffic, no road closures for this competition. Participants have to travel a certain distance at an average speed (also below 50 km/h) in so-called English trials or in a certain time, Italian trials. Time is measured with precision of one tenth of a second by means of a car installed device, that communicates the time of the passage to a receptor installed by the organizers at the edge of the road. Accumulating delays or advance time over ideal time determines the crew’s result for each stage and, implicitly, the results of the competition.

Penalties at the end of the stage are added to each team’s result. Competitors are divided into groups according to the age of the car, each with an individual ranking. In addition, team rankings and, of course, the overall results are documented.

The minimum equipment for this type of competition includes the distance measurement device, one or two stopwatches, a pocket calculator, a smart co-pilot, and a patient pilot.

The prize is awarded to the first three teams, but also for the oldest competitor or the youngest co-pilot, the smallest engine, the competitor ariving at the start location from the longest distance, and of course, the oldest car.

2018 is the third year races are organized in a seven-stage regularity rally championship with vintage vehicles by Retromobil Club Romania (RCR).

Everything starts in Prahova, through the Old Cars Rally, where the route reaches Cheia resort, with a visit to renowned wine cellars in the sub-Carpathian region. The championship moves on, throughout Romania with the Castle Classic Rally, organized by Classic Car Club Mures, visiting the less known castles in the area.

Moldavia has the honor of organizing the rally each year in another county, combining the competition with visits to landmarks or historical sites. In August, competitors arive in Sibiu, where the route usually includes the neighboring area of Sibiu and one of the most famous romanian mountain roads, the Transfagarasan.

Next is the Carpathian Retro, organized, each year, in another region of the country, followed by the Kronstadt Classic Rally around Brasov, and in autumn, the championship ends with Giurgiu Memorial 1904, in the area where the first rally in Romania took place, more than a century ago.