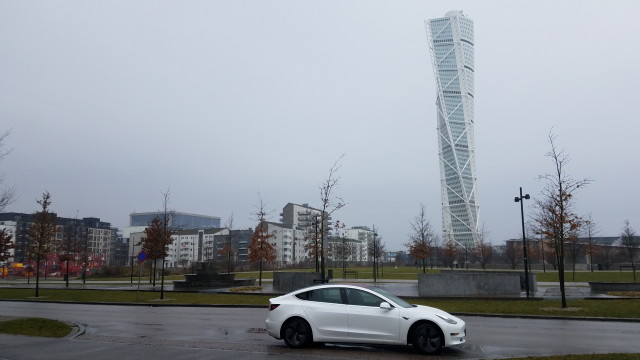 Initiated by the online magazine 24auto.ro, the electromobility project is providing free test drives to first time electric car drivers. We started offering rides and drives on September 21st, 2018 in Timisoara, Romania. During the last five months more then 100 people in Romania, Michigan, Sweden and Germany drove our two EVs, a Hyundai Ioniq and a US spec Tesla Model 3.

We publish weekly information about electromobility experiences and encourage drivers to write about their own electric endevours. Here is an interesting testimony from Victor, who drove the Model 3 in Malmo, during our February trip from Drammen, Norway, to Timisoara, Romania:

“A few weeks have now passed since I drove the Tesla model 3 for the first time and some firsts are truly more significant than others. I’ll give an example of another significant first so you’ll catch my drift but to do so we have to go back about a decade in time.

The year was probably 2009 and this newish thing called a smartphone was just starting to happen. Since I was kind of a tech geek I tried most of the ones I could get my hands on. They were all pretty much fine but if we are to be honest they weren’t particularly smart. They could do a lot of things but they did it in a very clumsy and unintuitive way.

Then apple released the iPhone 4. And the thing was ACTUALLY usable. The applications weren’t all wonky and desktop based and even though it didn’t do all the crazy futuristic stuff my new phone does it did most of the stuff that actually makes my life easier. Fast online searches, easy emailing and access to all the information my slowly evolving mind can fathom. And when I brought the thing home it significantly changed the way I communicate. For better or worse.

In the same way I imagine the Tesla model 3 will change the way we, or at least I, think about electric cars. Yeah, we’ve had them for a wile but they’re either kind of complicated and weird or insanely expensive. And let’s not forget about the elephant in the room that’s spelled RANGE. It is often times not very impressive.

My brief experience with the Tesla did start to change my mind about the potential of this kind of car. The driver set up was easily done and the driving experience was really something else from what I’m used to. In all the right ways. With a few minutes of training you can really drive this car around with the use of only the acceleration pedal and it’s really smooth. If you then floor the thing it’ll give you instant acceleration that is intense, to say the least. And it’s a nice place to be if you’re drawn to cleaner designs. Forget dials, dashboards and millions of buttons. It has a huge screen and that’s about it.

But I don’t mind. That screen tells me all the stuff I really need to know and if you can work an iPhone you can work this car. The screen also addresses the aforementioned elephant in the room. It tells me that I have about 400 km of range at almost full charge and the navigation will plan my route via fast chargers on my way. Provided it works of course which the American version of the model 3 didn’t do here in Europe.

I am really intrigued by this car though. It addresses a lot of the impracticalities of electric cars and does so while being intuitive to drive and potentially usable for longer journeys without the headache of having to charge for hours every couple of hours. And the price point makes it almost attainable for the masses of the western middle class.

For me, the test drive was  a significant first. Let’s give it ten years and see just how significant the car I drove will be for the automotive industry.”